The Armadale Highland Gathering is a FREE event, you do not require a ticket.

You will need to register separately for the Perth Kilt Run by CLICKING HERE. 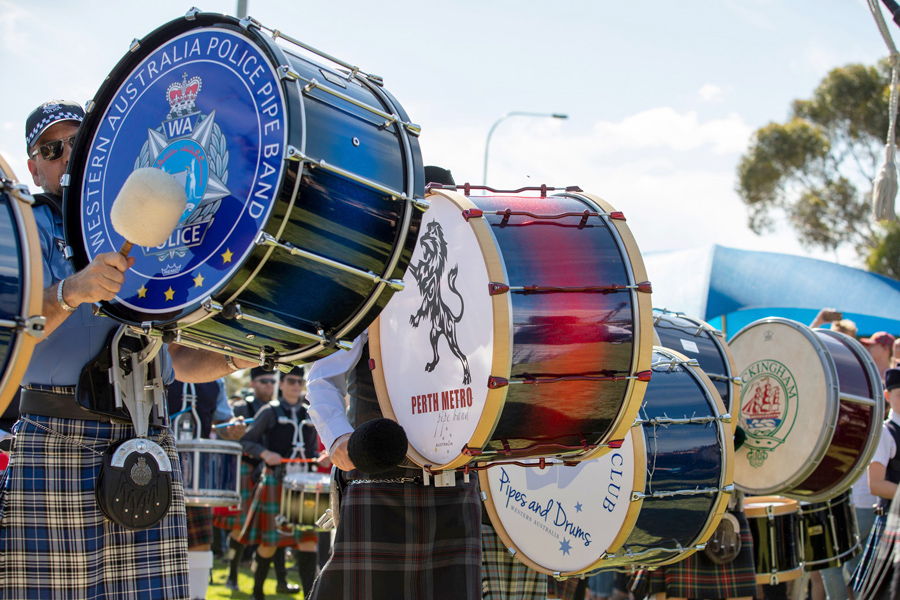 Featuring some of WA’s award winning Pipe Bands, the Pipe Band competitions will take place on Frog Hollow (next to Minnawarra Park).

Come the end of the day, the Pipe Bands display a powerful tribute to its Scottish ties by presenting the Massed Pipe Band procession. There is plenty of food at the Armadale Highland Gathering. From traditional haggis and square sausage to fudge tablet and black pudding – you can try a variety of Scottish delicacies.

If these don’t peak your interest we have more including, sausage sizzle, multi-cultural foods, churros, icecream and the list goes on. A competitive solo dance, Highland Dancing is one of the most vibrant events at the Gathering, where dancers of various ages dance at beginner, intermediate and premier levels.

Be sure to come and watch these accomplished dancers perform various jigs in colourful Scottish attire .

This year’s Highland Dancer are being organised by the WA Metropolitan Regional Committee of Highland Dancing Incorporate (WAMRCHDI). For more information about the WAMRCHDI please visit their website here. Live entertainment of the Scottish variety will captivate audiences throughout the Armadale Highland Gathering, including performances from highland dancers, fiddlers, and popular local band, the Jarrah Celts with their music of Celtic, Irish and Scottish descent. Take a seat down the front, you don’t want to miss a minute. Introducing the new Armadale Atlas Stones, nine reinforced concrete spheres ranging in weight from 9-161kg. Lifting stones have been a part of many European cultures as a traditional test of strength and endurance.

When lifting stones were brought to the World Strongest Man competition, they were previously known as the McGlashen Stones, Scotland’s traditional Clach cuid fir or in Gaelic, ‘manhood stones’. At the 1998 World Strongest Man competition held in the Atlas Mountains of Morocco, the name was changed in reflection to the connection with the Greek titan Greek titan Atlas, who was condemned by Zeus to hold up the heavens for all eternity after losing a war against the Greek gods.

Brought to you by the City of Armadale through the initiative of the Armadale Highland Gathering Committee’s Heavy Events Team, product made by and photo credit to Ford Strength.

Come try your hand at these stones and see how many into the nine you can lift. Anyone can have a go! Artisans, Blacksmiths, Knights and Ladies all await your visit into the Medieval Fair as you are transported back in time and into this hive of activity. A fine display of skill in the medieval arts and crafts, watch as the knights battle in the arena or visit the armoury for your chance of some excitement. The kids can try their hands with some Scottish fun as well with loads of activities throughout the day including free boffer sword fighting, face painting and mini golf. The Loch Mess Monster Upcycle Challenge is a community arts initiative to engage local schools in a creative recycling project. Students, with their teachers, are invited to create a sculpture from recycling materials, embodying the principles of ‘Reduce, Reuse, and Recycle’. For all things Scottish (and for fun) we have a rowdy village full of clans and market stalls.

If you have some Scottish heritage but haven’t joined your ancestor’s clan, come and connect with your kinship. If you want your some Scottish souvenirs, kilts, pet wares and more, then this is the place to be. The Heavy Events showcase the athletic skills of our tartan warriors as they compete in a traditional strongman competition. Visitors will bear witness to astounding strength and determination as competitors battle in the following events: Scottish dogs of many sizes and colours will be joining the festivities, they and their owners look forward to meeting you just across the bridge in Minnawarra Park! Dog agility demonstrations will be held throughout the day. Always a popular display at this event, you will treated to a sporting display of experienced dogs and a few new rookies, perform a variety of skills in the arena. Owners are happy for you to come and meet their friendly dog and find out more about these amazing breeds and how to look after them. If you are considering bringing your dog down to this event, please ensure they are on a lead at all times and you clean up after them, with some waste bags provided at the park. We also recommend you consider your dog’s ability to handle large crowds, loud noises and other dogs within the area.